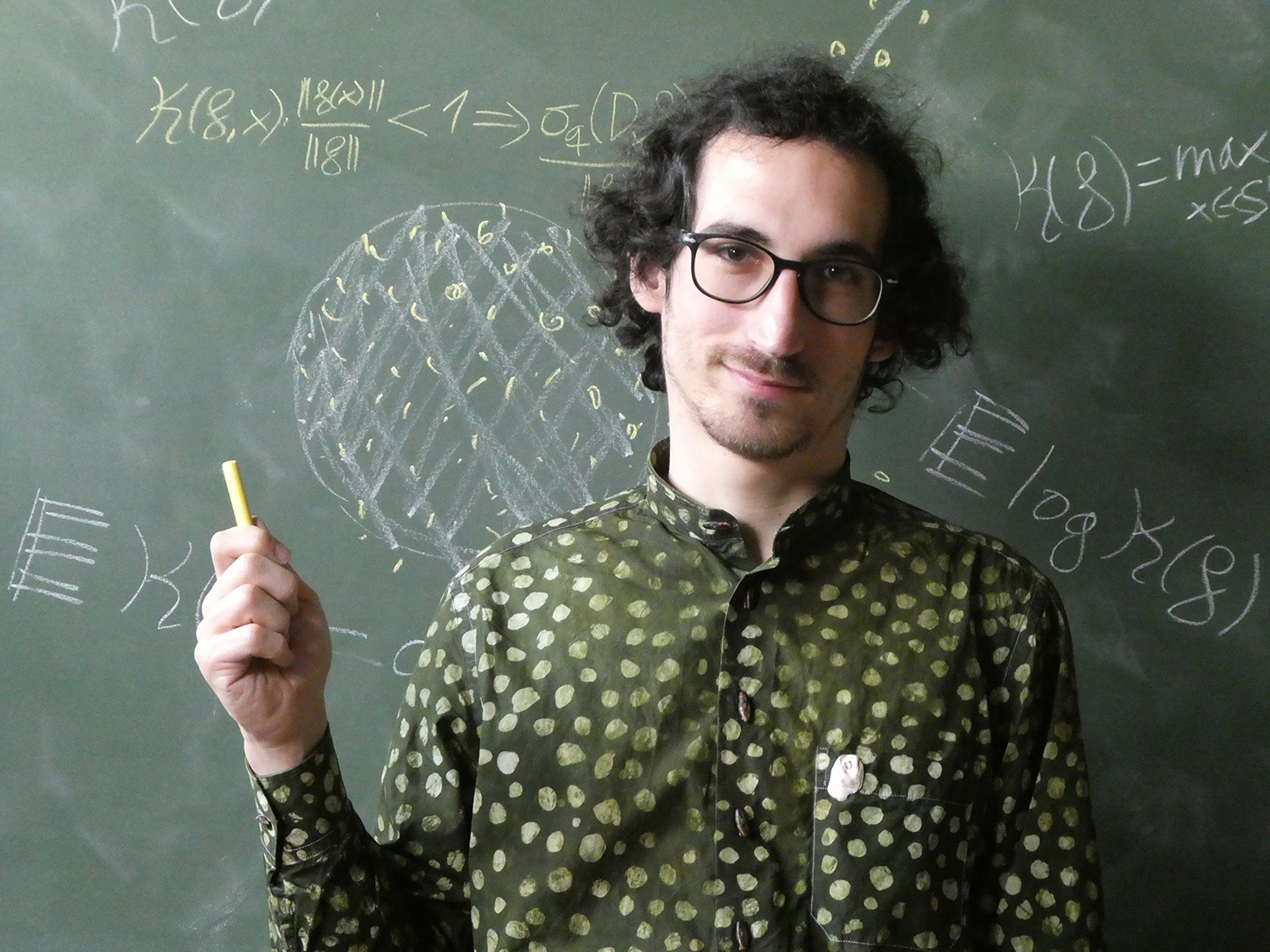 My name is Josué Tonelli-Cueto. However, this is a small lie. My actual name is Josué Tonelli Cueto. In Spain, it is customary to have two surnames, one being the first one of the father and the other one the first one of the mother. However, to avoid confusion in international contexts, I write my surname with a dash. In this way, it is clear that both words form part of my surname and that none of them is a middle name.

Currently, I am a postdoctoral researcher at INRIA Paris and the IMJ-PRG under the mentorship of Fabrice Rouillier and Elias Tsigaridas. My interests are numerical algorithms and condition-based complexity, computational algebraic geometry, and random geometry.

Apart from discussing, thinking and writing about mathematics, I also enjoy other aspects of life. Here is a quasi-random alphabetical list of another ten things I enjoy: 1st, chatting and discussing random topics with friends (and sometimes other people) over a beer (or other equivalent drink); 2nd, drinking coffee; 3rd, folding origami figures; 4th, Iberian ham; 5th, reading non-mathematical books; 6th, riding a bike; 7th, sending postcards; 8th, swimming in the sea (when possible); 9th, walking while lost in my thoughts; and 10th, writing short stories, poems and calligrams. Of course, there are more things I enjoy, like cats, but listing things I enjoy is not something I enjoy.

I studied the Licenciatura en Matemáticas, which is a five-year bachelor in mathematics, at the University of the Basque Country between 2009 and 2014. During my studies, I founded and edited, together with Ricardo Grande and the help of Marta Macho-Stadler, the magazine $\pi kasle$. This magazine was a magazine about popular mathematics written by students. Also, I participated in the debating club of the university.

Additionally, during my studies, I was lucky enough to be given further opportunities to pursue further my mathematical interests. In 2011 and 2012, I attended the Undergraduate Summer Program of the Park City Mathematics Institute, thanks to grants provided to me by the program. In 2013, I could enjoy a summer undergraduate research experience at the ICMAT in Madrid under the supervision of Andrei Jaikin-Zapirain, thanks to a scholarship of the Spanish Government. And, in 2014, I enjoyed another undergraduate research experience at the University of the Basque Country under the supervision of Gustavo Adolfo Fernández Alcober, thanks to a scholarship of the Basque Government.

In 2014, I joined the Berlin Mathematical School, a joint graduate program in mathematics of the three Berlin universities, as a Phase I student (i.e., a master student) thanks to a scholarship of ”la Caixa” Foundation and the German Academic Exchange Service (DAAD). In 2016, after completing the Qualifying Exam of the BMS, I became a Phase II student. In 2017, I concluded the Master in Mathematics at the Technische Universität Berlin, after writing my master's thesis under the supervision of Peter Bürgisser. That same year, I became a PhD student of Peter Bürgisser and Felipe Cucker at the Technische Universität Berlin, thanks to a doctoral fellowship funded by the Einstein Foundation Berlin. In 2019, I successfully defended my PhD thesis on the 28th of November and became a doctor.

During my stay at BMS, I have participated actively in the life of the school. During 2017, I was a BMS Student Representative; in 2018, I organized the BMS Student Conference, together with my fellow student representatives; and, since 2016 until the end of my studies, I was participating in the organization of the “What is...?” Seminar.

In 2020, I started a postdoc at INRIA Paris and the IMJ-PRG under the mentorship of Fabrice Rouillier and Elias Tsigaridas.

You can research my mathematical academic ancestors and relatives through the Math Genealogy Project.